We had seen so many castles in the Irish countryside that even the dauntless explorers, J and L, had to think three or four times before stopping by one of Ireland's premier tourist attractions. Thousand year old structures in the middle of the rolling green hills we had crawled through on hands and knees, clambered to parapets over broken stone circular stairwells, and even walked through an underground mud pit to flash a light into what was once a dungeon.

Why would we want to pay 15 Euros to follow lines of visitors traipsing through a restored 15th century castle by the 7th Viscount Gort in 1956? But, then again why wouldn't we?


So, as we drove along the N19 road between Limerick and Ennis a stop in the center of Bunratty Village looked like a good idea.


One of the better decisions, and there were a lot of them, during our summer trip to the green island. A chance to wander the grounds of an area reported to be one of the first Viking settlement/trader camps in the County Clare. According to local legend the settlement was destroyed by Brian Boru in 977 CE. With this story though no evidence of the settlement has been found but then again there is always tomorrow and  a possible bonanza archaeological dig.


We'll stick with the local tradition for now, much more romantic and deadly.

Walking through history is a trip not all can take but going from the 21st to the 15th century by simply slipping past a turnstile was well worth it.

The weather was perfect for a pair of travelers making their way from one exhibit to another with the sun making a strong showing every few moments between drops of rain. A lovely summer day in the middle of the Republic of Ireland. 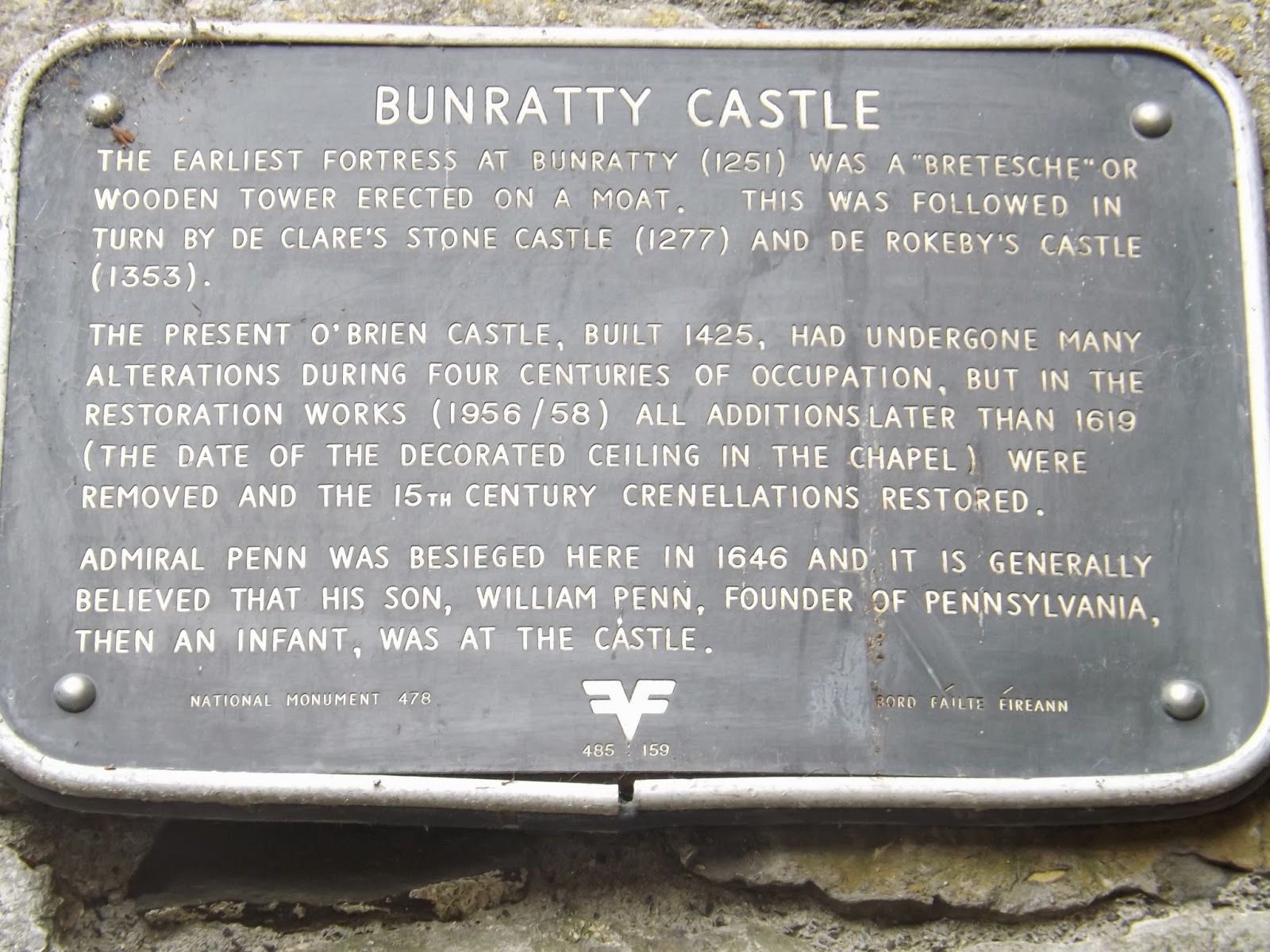 Bunratty Castle (Caisleann Bhun Raithe) is located on a large open air Folk Park covering 26 acres and housing over thirty buildings which contain shops, ancient and more modern structures (the late 19th century showing what life in a small community was like through the centuries. 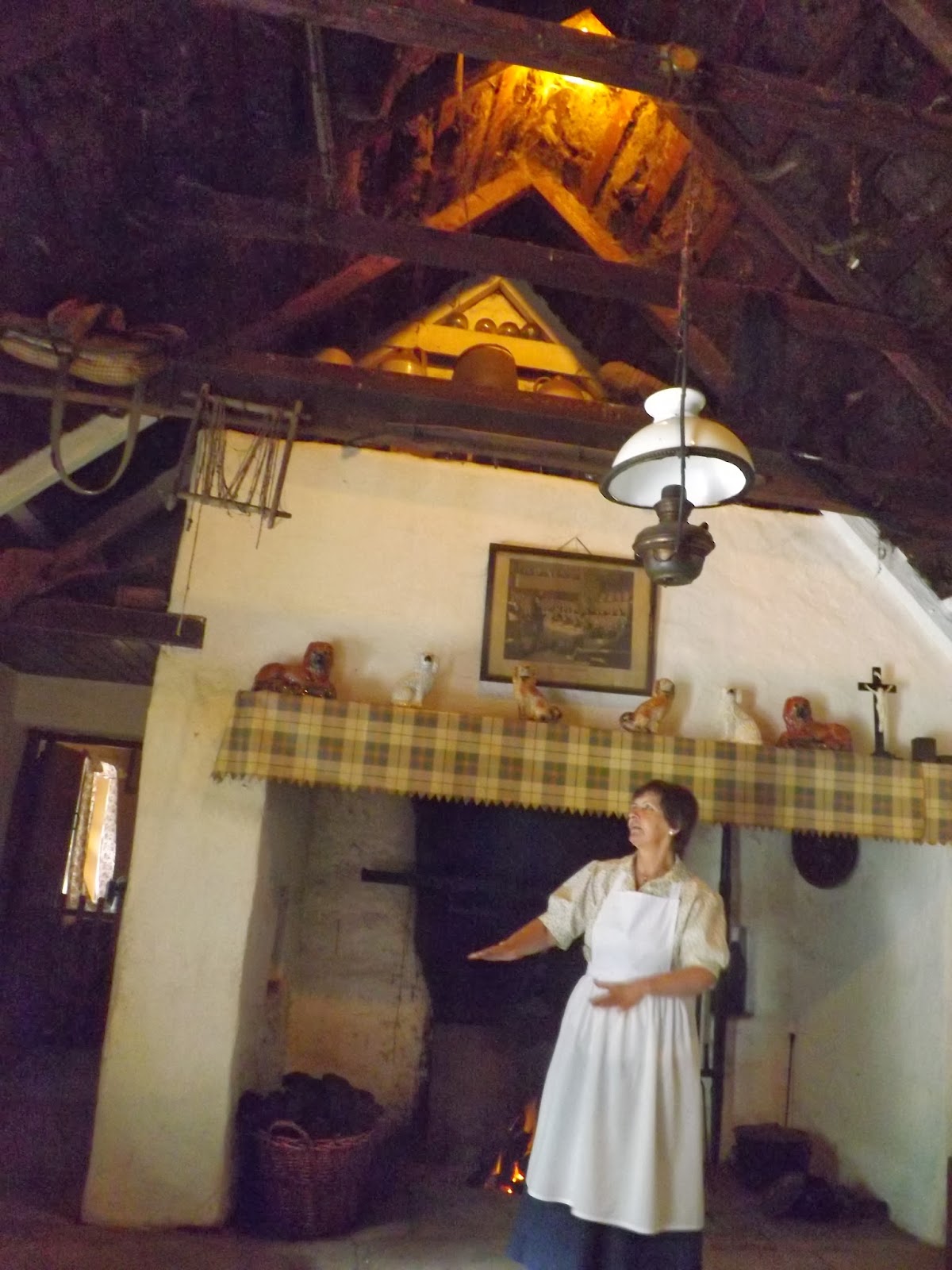 While walking through the village we came upon a thatched roofed cottage, rather large in comparison to the other ones we had viewed, with a peat fire in the hearth and met a woman in period clothing busily pounding dough on a large wood table.

"I'm making dumplings. The best in all of Ireland."

And indeed they were as we learned while visiting the small pub next door. Though we didn't eat any more during visit to Ireland, so they were indeed the best we had had.


The rain fell softly and warm but did not deter two eager adventurers from exploring the small but delightful Rose Cottage to the Ardcroney Church of Ireland at the far end of the Folk Park.


Four hours and four tired legs later J and L had witnessed all the park had to offer including the magnificent castle.

Narrow and steep stone spiral staircases on all four corners of the interior allowed visitors to truly experience what life must have been like five centuries earlier in County Clare.


Cold, wet, smelly (with peat burning all day and night), smelly (bathing usually was not a daily occurrence), often times hungry depending on a good or bad growing season. And was cold and wet mentioned already?

As we departed from our trip into the past both of us were glad to get into the comfort of our rented 21st century vehicle and heading to our hotel instead of having to live the reality of bunking down for the night inside an airy thatched roofed home.


Romantic? Maybe but still cold and wet most of the times. Or perhaps, that is what it makes it so charming.