The Talk of San Diego

The Director and the Directed
in their element

J and L were invited recently by our pal the Law Dog, Tino Luciano to show up at the Wooden Nickel Ranch in Menifee, CA for a television interview conducted by The Talk of San Diego, a local media production team headed by Johnny Nevada and his bevy of beautiful female co-hosts. On this fine Sunday afternoon, the host was Andrea Bensussen who was friendly, professional, and ready to ask questions of both J and L after she got through her interview with Tino Luciano. Yes, we responded to Tino's request for us to be at the Wooden Nickel Ranch to help launch his new movie (which starts filming soon) entitled, The Reckoning of Scarlet Waters. Tino had been contacted by The Talk of San Diego who wanted to film the interview in an 'authentic' appearing period western town and the Wooden Nickel Ranch fit the bill. The ranch is a delight for those who enjoy the romance of the old west and besides being a setting for films, commercials and other media events the owners provide breathtaking backgrounds for weddings, quinceaneras, birthdays, and much more including summer horse camp.

So, Laureen and John showed up in period dress, 1880's western for an afternoon of walking about the small but pretty authentic looking western town which is tucked away on the twenty-five acre ranch.

To our delight we were included in the interviews and discussed what a fine director/producer Mr. Luciano is besides the fact that he is just plain fun to work for on his sets (John also shamelessly got a plug in for his novel Hunted  due out May 18th). One of the great moments of the day was when John was directed to come out of the town's saloon with his .45 raised in the air and was stopped by the distinctive voice of Tino yelling: "Cut." At that moment the Director stepped up and joined John on the wooden sidewalk in front of the saloon and advised the Talk of San Diego's audience what was time period and what was not time period in John's attire. Tino is amazing as he approved everything but the cowboy boots with pointed toes and the holster which was a Buscadero rig dating from the 1920's instead of the 1880's. Overall, John received a 93% approval from a very picky but accurate director, which the teacher in the team approved.

Again, a great day of exploration of a new place, the Wooden Nickel Ranch, and time spent with friends. 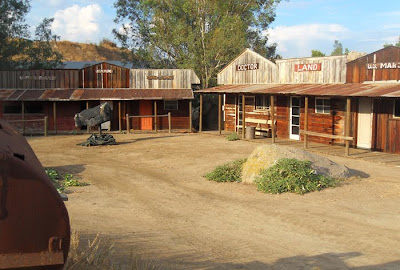 The Wild West is Back in Business 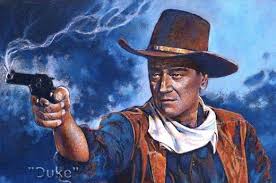 The title of this posting is not a push for the government to arm all citizens but simply as a way to announce that in the Southwest with the coming of spring Old West historical towns are really open for business. These locales, of course, cater to curious tourists throughout the year but it's when the cactus blossoms are blooming and the air turns from winter crisp to warm days that the towns start to awaken. It is this awakening which allows the inquisitive to explore and wander back into the days of when the west was truly wild and woolly.

Towns such as Jerome and Tombstone in Arizona, Virginia City and Goldfield in Nevada, Bodie and Calico in California are shaking off the dark of the winter and welcoming the warmth of longer days and higher temperatures. Having been to these true old west towns too tough to die when the silver or gold ran out brings us to the headliner of this blog. A small simple wooden facaded town in the middle of the Mojave Desert which is probably one of the most recognised frontier towns from the 1880's through the 1890's is the focus on this date. This dirt street, wood side walked ramshackle appearing village never existed. It was a town built to resemble any of a number of real locales where men walked armed down the streets, bar brawls were a daily occurrence and for a days wage a casual lady may offer her friendship to a lonely cowboy or miner. It is a convenience invented by Hollywood for the purpose of filming westerns when westerns were king.

We visited this tiny burg recently and learned more about the place than we had expected and actually became part of the daily runnings of a mining town from the 1880's. The best part for this writer was shooting his 1873 Colt .45 Peacemaker to the thrill of nearly 100 tourists. Of course, for the safety of everyone any weapon being fired has to be a replica blank firing gun.

We are referring to Pioneertown just a few miles northwest from Yucca Valley, only 33 miles north from Palm Springs and a good drive of 124 miles east of Los Angeles but all worth the scenic drive and time.

The historically accurate time period town was created for movies and televisions shows by Hollywood in 1946 as an actual 'live in' town for stars to reside during filming and production. Along the Mane Street (not a typo) there are still about a dozen or so people living in the actual abodes built during that time period. Though the whole of Pioneertown boasts only a population of 350 souls it is well spread out through the cactus and Joshua tree vastness in a pocket of land at the base of the Sawtooth Mountains. This location allowed directors to film their subjects without too much interference from the winds which generally are constant through the Mojave Desert and kept most nosey and noisy airplanes out of the camera shots.

Over two hundred films were filmed at Pioneertown including but not limited to The Life and Times of Judge Roy Bean (1972), The Scarlett Worm (2011), Last Chance (1999) as well as dozens of television series including but again not limited to The Gene Autry Show(1950), Range Riders (1951), Tales of the Frontier (2011) which is by our good friend Tino Luciano.

We had been invited to Pioneertown by another friend of J & L's, Jon Linn (an accomplished musician and actor) who runs a newly opened guitar shop in the center of Mane Street for a day of merry making with the Mane Street Stampede. The Stampede is a local group of western re-enactors who perform every Saturday at 2:30 p.m. on Mane Street (of course) in front of excited tourists looking for a bit of yesteryear from the wild west between the months of April (we were in the first show for the season) until October. These folks never fail to tantalize the crowds with gunfights, comedy routines, and a brief oral history of what life was like in the early days of the West.

Did I mention how much I enjoyed joining this group and shooting up the place with blanks?

During the show we met visitors from France, Italy, Germany (it appears, during our conversations with these fine people that Europeans are enthralled with the American West and will take any opportunity to visit and experience what it was like during the heydays of the late 19th century) and of course across this great country named America. Nothing but smiles, grins, laughter, and wide eyed expressions of wonder greeted the company of Mane Street Stampede during the thirty minute show. It was great time for all involved.

Though this town boasts a fabulous movie and television history one has to remember it is a living entity. By no means is Pioneertown a ghostly haunt but one of vibrant characters making a living through film making, artisan crafts (we met the owner of Chaparosa Outfitters, Gary Suppes, who was painstakingly and lovingly oiling a special order horse saddle which was a work of art), overnight accommodations (Pioneer Motel), and the wonderful eatery Pappy and Harriet's (the food is awesome and the service outstanding). This locale breathes life into every day of every year and it may be getting set for an unbelievable resurgence of the western film making days which started its existence back on September first in nineteen forty-six when Roy Rogers broke the ground for the first building. For sixty-three years this town has survived recessions, loss of interest in westerns but has always existed to entertain those who have a love for the old west. A time when people truly cared about each other, when families stayed close, when a neighbor would never think of turning their back when needed and especially when personal honor meant something more than a phrase in a sentence during a campaign speech.

The future never looked better for Pioneertown with the new film by Disney, The Lone Ranger, being released in July starring Johnny Depp and Armie Hammer. Doing a little research with some folks in the 'know' there is speculation that westerns will be returning the the big screen for the next ten years. The romance, the adventure, the story of Americana, and where the good guy always wins will be the shining light for years to come. It's when a man (no unintended political incorrectness) took responsibility for his own actions and never blamed someone else but simply got knocked down, pulled himself  back up by his boot straps and moved on to make a better tomorrow for himself and the rest of society. Hard work. Long hours. And at the end of the day as the sun set in the west knew he had down as best he could on his own or with the help of his close friends.

It was and is what made the United States the envy of the world.

The West is back - don't put your holsters away!

For further information on the above topics: 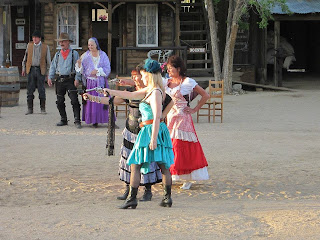 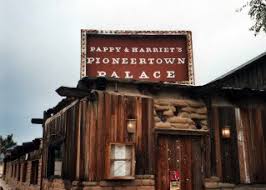 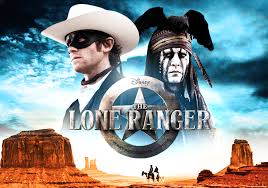