In a small town in northern Illinois, a boy was born to a very poor family – poor that is financially but not spiritually. They struggled to achieve the American Dream, and it was their determination, along with the boy’s desire to make more of himself than his humble beginnings offered, that lead to success. Ronald Wilson Reagan entered this earthly plane on February 6, 1911 and from there, the rest is history, as the story goes.

Enrolling Eureka College in Eureka, Illinois Reagan excelled as a student - especially in sports. The future 40th President of the United States graduated in 1932 and entered the world of radio, beginning as a sports announcer. After stints on several regional radio stations he turned his talents to acting in 1937, starring in some major productions. ‘Dark Victory’ with Bette Davis in 1939, ‘Knute Rocknew, All American’ in 1940, ‘Bedtime for Bonzo’ in 1951, and dozens more made him a major household name. Serving as the President of the Screen Actors Guild offered him a chance to hone his skills as a communicator, negotiator, and understanding human nature.


With this background and experience, it wasn’t much a jump for the passionate man to enter the world of politics – first as a Democrat but in 1962 before switching parties to the Republicans where he backed, unsuccessfully Barry Goldwater’s presidential campaign.

The result of that effort though was national political recognition for Ronald Reagan. Enough that he ran for the governorship of California in 1966, serving to two terms as the state's leader, and leaving the state budget with a surplus. Every political party likes that. In 1980, the Great Communicator defeated President Jimmy Carter in a landslide.

Of course, with the presidency comes dang,er and it struck President Reagan, along with members of his entourage, on March 30th, 1981 in Washington D.C. when a lunatic tried to assassinate the President with a Rohm RG-14 (.22 caliber) pistol. Luckily, though four people (one being Reagan) were seriously wounded, the President survived. It would take more than a whacko with a gun to keep the ‘Gipper’ (nickname from Knute Rockne) down for long. His run for the second term in office was won with the largest Electoral College victory in the country’s history.

So, in honor of one of our greatest presidents, in our humble opinion, we planned a visit to the Reagan Presidential Library at the beginning of 2018 in Simi Valley, California. The grounds are situated at an incredibly beautiful location, standing strong and proud on the top of a hill overlooking the valley.

With over 100,000 square feet in dozens of various galleries, visitors can easily spend an entire day wandering over the spacious grounds, and the library which details Reagan’s humble beginnings to his time as President and beyond, to his death in Bel-Air on June 5, 2004.

Everything is there for the visitor. His rise to power – the people he met – the conquests he made toward world peace with an actual large section of the Berlin Wall, next to the Ruwe Terrrace, which came crashing down after his famous speech at the Brandenburg Gate in West Berlin.

“Mr. Gorbachev, tear down this wall!” And the wall fell ten months after he left office as the demise of the ‘Evil Empire’ – Soviet Union – officially began on December 26, 1991.

The Great Communicator had done it -- and as a tourist you can walk long hallways depicting the struggles entailed as well as view the actual video footage of this and countless other historical events taking place during President Reagan’s tenure at 1600 Pennsylvania Avenue. 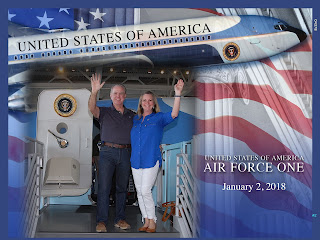 Walk onto Air Force One, parked on pedestals while looking out massive glass windows staring out over Simi Valley and marvel at the White House of the sky. Tour ‘Marine One’ or simply walk by the Presidential motorcade utilizing the actual vehicles which drove the 40th President to his functions. 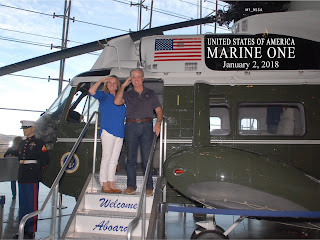 There is so much to see that one blog – this one cannot begin to tell the tale of what the visitor to the Ronald Reagan Presidential Library will experience.


An experience for the American citizen as well as to our friends from around the globe – visit this sunny valley in Southern California and see the grandeur of what made America who she is today and will always be.

The life of one great leader the world respected, loved and feared.