We often express our personal desire to go explore what is new and exciting in our own backyards and recommend that pursuit for all to enjoy.

This summer, J and L decided to walk the talk and ventured out upon an Alaskan cruise through the Inside Passage aboard the Emerald Princess.

While admittedly, there isn't much of a backyard to explore on a ship sailing along the coasts of Canada and Alaska, there are ports and niches worth further investigation. Of course, when in port there are a myriad of activities to keep even the most active person moving at a fast pace, day or night.  But even on board, what this cruise ship has to offer is amazing. There is nightly entertainment in various venues from comedy to world-class musicians. There is the wonderful food to try in the buffets, elegant restaurants or just casual outdoor and indoor specialty bistros. There are enough bars on the port or starboard to keep libations pouring at all hours. There is a pool for swimming and hot tubs for soaking, as well as an expansive gym with huge floor-to-ceiling windows overlooking the bow with panoramic views of incredible natural beauty. In other words, there is plenty to keep one happily occupied on a ship for the duration of the cruise, no matter how many days at sea. 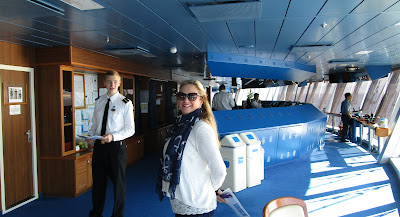 But what we didn't expect were the two delightful treats which became the subject of this blog entry. The first was that J and L received an invitation from the Captain to tour the bridge of the Emerald Princess. The second, was the opportunity to take to the stage to perform as part of the Princess Pop Choir. But, more about that later.

First, let's start with the bridge tour, since it was less painful.

The tour was set for 9 a.m. and as always, we were punctual. Wouldn't want to keep the Captain waiting. We began by learning a few details about the Emerald Princess. She is large, 951 feet long beauty with a beam  (width) of 118 feet, and weighs in at 113,561 gross tons. It was built in Italy and was christened the 13th of May, 2007 and been in service carrying passengers ever since.

We were whisked onto the bridge by a security officer, Marlon, who hails from the Philippines, and after a few introductions, the tour began. The bridge is the brain for the entire ship's operations on the Emerald Princess. This command center is a very serious place, ensuring the ship is running properly at all times. As such, we were advised very politely not to talk to the two officers on deck who were busy navigating that morning. We heeded that advice. We didn't want any shipwreck on our hands due to some questions we may want to pose and have one of the officers divert their attention from the controls.

The Captain greeted us warmly before being called away to attend to some matter of importance on another level of the ship. He left us in the excellent care of Deck Officer Matthew Cannon. Matt is doing his tour of duty as a cadet, learning the ropes of navigation and operation of the Emerald Princess.

A strapping and humorous young man from England,  exuded such great pride when he spoke of the ship upon which he was training. He smiled as he spoke of the intricacies, the myriad of skills and equipment it took to navigate a ship this size. This was as true on the open ocean as it was for entering the often busy ports of call..

We did marvel at how expertly the crew moored the ship, seemingly effortlessly easing alongside the dock. John was breathless with wonder, and perhaps a bit of jealousy, imagining bringing J and L's own boat into port without occasionally having to exclaim: "Watch the dock - we're coming in hot."

No such words were uttered on the bridge of the Emerald Princess. 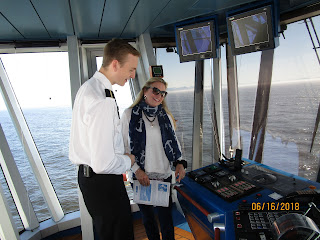 Cadet Officer Cannon took his time in explaining the many instruments on the bridge, and the purpose of each in minute detail. He allowed J and L to wander freely on the bridge and ask questions concerning anything that dealt with the running of the ship. The view was breathtaking from the large glass windows which overlooked  the Pacific Ocean crashing across the sleek pointed bow many decks below us. 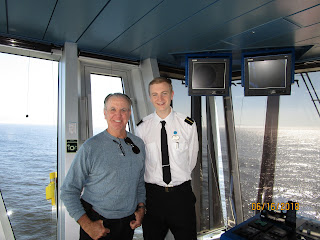 We took our time and then finally the tour was over - Deck Officer Cannon needed to get back to work and not just be a guide for a couple of writers.

It was a spectacular treat that not all guests receive and we were thrilled to be allowed the privilege. 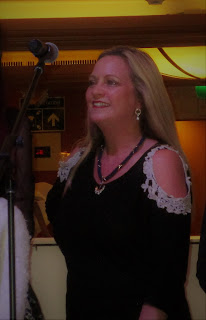 It was advertised that the ship was looking for volunteers to sing on the cruise to other passengers. Somehow L convinced J to join a group of passengers who would practice singing five songs everyday under the guidance of the Assistant Cruise Director Yessenia Malca. The petite, young Peruvian lady was one tough director. Punctuality was a must for this cruise director and when she said practice was at five or three or whatever you had to be there. 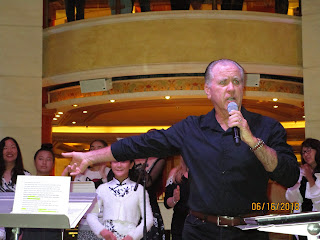 So, for an hour a day we'd run through a new song, and review the previous day's music, until one after the other, the small choir of approximately 15 singers had learned them all. We were training for the last full day at sea where we would be the ship's entertainment on the Grand Piazza. 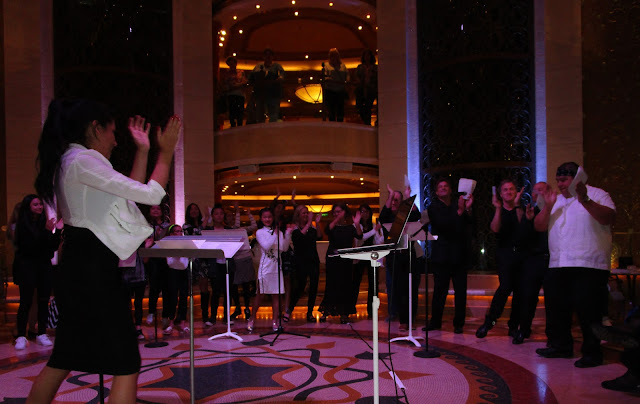 This is the painful part - J is not a singer by trade though L is, and a beautiful voice she has. But after being in a musical earlier in 2018, L convinced J that even he could be trained for 5 little songs. He acquiesced and a Star was Born. Well, maybe not quite, but in reality J kept up with the other altos and even managed to pick up the few simple dance steps our beautiful director decided to throw in.

Five days of training and the moment of truth was upon us as the Princess Pop Choir took the stage. Dressed in black and white, we performed in front of more than 300 of our fellow passengers. We must have been okay as no rotten fruit was thrown. Most of the crowd sang along, clapped, and generally had a good time.

Just before the performance orchestrated by Yessenia, she advised J that he would not only sing but be the emcee after the performance - introducing the cast and chatting about the experience to the audience.

That was something in J's forte - speaking to crowds is easy - singing to them, not so much. 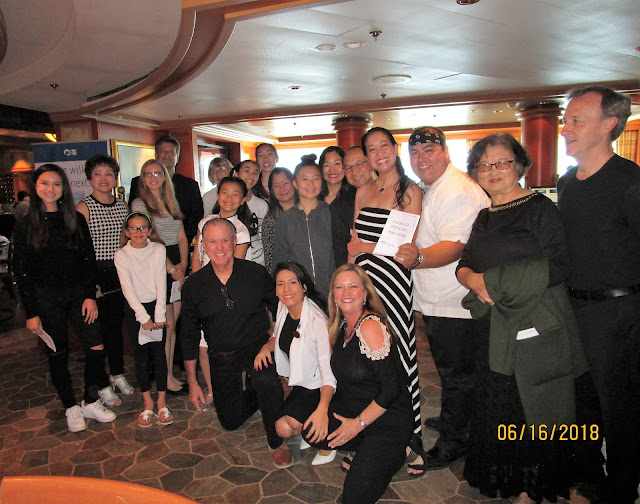 The Princess Pop Choir was a hit, finishing to raucous applause before retiring off-stage where the champagne flowed as we warmly thanked our director, Yessi, and posed for photographs with our new friends.

Princess Cruises has a motto: Come Back New. Yessi has her own saying, "Most come aboard as passengers, and leave as..." Friends? Family? No. Yessi said some leave as cargo...A bit of tongue-in-cheek description of how we all eat so much at the buffets and generally take advantage of the opportunity to do nothing but be catered to...Not that there is anything wrong with that. When you have only a short time off from the Great Rat Race, relaxation is a prescription which allows you to come back new. But, sometimes, grabbing that adventure, stepping out and trying something totally different, is another way to come back new...and perhaps a little less like cargo.

So, no matter where you go, there is always a new adventure out there, waiting for you. Take a chance, go out and explore. We never expected to have such a great time cruising. J and L tend to prefer the freedom of making their own adventure and feared the cruise would be too restricting. And we're happy to say we were wrong. It was an adventure. Our lesson: Do something different. We did and had a pretty good time doing it - even with J's singing.