On a muggy August 14th, 1851 in Griffin, Georgia a bundle of joy was delivered to Henry and Alice Holliday. The thrill of having a son must have been awesome for the couple, but tuberculosis would take Alice in September of 1866 leaving her then fourteen year old son mother-less. He was a smart child and eventually went on to earning a degree in dentistry from the Pennsylvania College of Dental Surgery at the age of twenty-one.


It was time to build a practice to make his mother proud but that would not be the case for John Henry Holliday - aka, Doc Holliday. No, he too came down with tuberculosis to which his mother and his adopted brother Francisco had succumbed. Under guidance the young man moved west to drier climates in the hopes that would ease the congestion and perhaps neutralize the disease.

John Henry moved to Dallas, got into a partnership in dentistry with Dr. John A. Seegar and their practice won award after award for the job they did for their patients. People were happy with their teeth in Dallas. In March of 1874 the partnership dissolved and Doc moved onto his own practice but that didn't seem to work out.

The move west had not cleared his tuberculosis and coughing out phlegm and other bodily fluids was not a good thing for a dentist to do. His practice dwindled and when he took to the life of a gambler, he began to garner a reputation for being pretty handy with a knife and a pistol.

Thus the sullied reputation of a dentist from Georgia was born. And it would have probably died if Doc had not run into a fellow by the name of Wyatt Earp.


A star was born.

One hundred and sixty-six years after Doc Holliday was born, his name continues to be immortalized in the small town of Tombstone, Arizona. It was here that a dentist turned gambler and killer would make his mark, standing side by side with Wyatt, Morgan, and Virgil Earp against the Clanton gang at the OK Corral. A thirty second gunfight would go down in the annuls of history as the most retold gunfight in western lore. 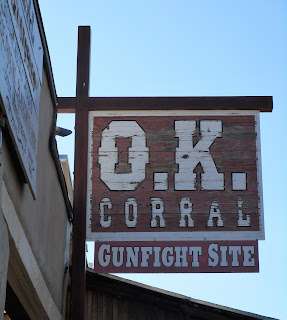 In 1993, a film was released featuring Kurt Russell named 'Tombstone'. The movie detailed all the events leading up to that famous gunfight on October 26, 1881. It was a blockbuster hit and still is with millions of hard-core western genre. 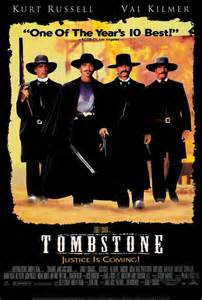 One of the main characters, of course, was Doc Holliday played by the very talented actor Val Kilmer. When the film was released the star of the show was Kilmer - Russell being the humble person he is (by all accounts) allowed Val to take the best lines and with this also allowed the film to become one of the most watched westerns of all times.

So, the town of Tombstone, yes it still exists happily looking over the valley toward the Dragoon Mountains to the east, decided to start an annual Doc Holli-Days celebration. A three-day event honoring the birthdate of the real Doc Holliday and who best to knock the inaugural weekend off but the one and only Val Kilmer. 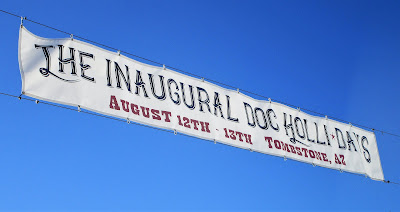 J and L loaded the trusty Dodge Ram and drove nearly nine hours to participate in this new yearly event in the town deemed - 'Too Tough to Die'. Of course, friends were waiting graciously in Tombstone and together they all dressed to kill - fictionally and not literally for the gala.

There was a meet and greet with Val on Saturday, a parade through the tiny town, a key to the city presented to Val, and many more events.

It was a grand affair and twenty thousand people from around the world - yes, there was a gentleman from South Africa present for the soiree, swarmed the wooden sidewalks and dirt streets to take part in this birthday celebration.

When meeting with Val at the Schieffelin Hall the actor sat in a straight back chair - smiled, shook hands and was happy to have a photograph taken with the fans. J and L were fans and had a photo taken with this truly adaptive and talented man. J then presented Val with a copy of his novel, Hunted, and Val seemed very interested and promised to read it shortly.


Within an hour the parade was on with Val as Grand Marshall.


Well, this blog has taken on a bit of length but we at J and L are not done with the trip to Tombstone. There will be more to follow - and to paraphrase Ike Clanton from the film Tombstone: