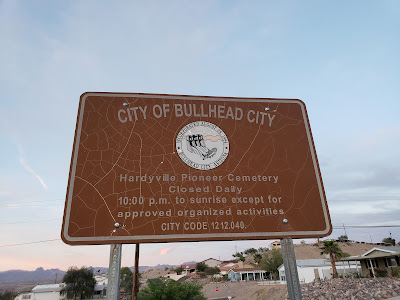 On a recent trip to Bullhead City, Arizona J and L (along with two of their four footed family members) happened onto an old cemetery perched high above the city. It sat just east of the Safeway shopping center and had a spectacular view of the mountains to the west, the Colorado River and the gambling meccas in Laughlin, Nevada.

A peaceful and serene patch of land, but aren’t most places where the deceased rest? There was a visitor information sign that read: Hardyville Pioneer Cemetery and the plaque was erected by the National Society Daughters of the American Revolution on November 6, 1999. 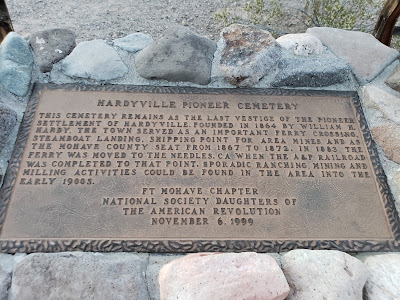 Another bronze plaque bolted into a large stone and cement base had a few of the people buried there in the Pioneer Cemetery: Bill Boone – 1866, William Brown – 1866, Thomas Gillan – 1872, and a few others not to be forgotten. It is always a little discomforting thinking about one’s own mortality, especially when in front of a grave yard. These people were alive with dreams and desires just like anyone currently viewing their names except they lived over one hundred and fifty years in the past.

No one is immortal in the physical realm.

So, what was life like so long ago by the shores of the Colorado River in Arizona before this modern era? What was a Hardyville and why this cemetery overlooking the grandeur of the Mohave Desert?
There was research to be completed.

The history of this area roughly 90 miles south of Las Vegas and directly opposite of Laughlin is in Mohave County nestled on the southern border of Lake Mohave. It is now a boater’s paradise with the lake and river close by but what drew people here before speed boats and jet skies were the norm?
In 1540 Spanish explorer Melchor Diaz traveled through the Mohave Desert and met the locals who inhabited the area. The Pipa Aha Macav which meant ‘people by the river’ were friendly to the traveler and it didn’t take much to understand why these people chose this area. Fresh water from the Colorado alive with fish and perfect for agricultural purposes. Eventually with more adventurers coming through the area after reading of Diaz’s exploits the name ‘Aha Macav’ simply shortened to Mojave (also spelled Mohave). It should be noted that the county uses the modern English spelling of ‘Mohave’ but the tribe still spells their name as ‘Mojave’.

In 1774 Father Francisco Garces crossed the river from what would be Nevada into what would later become Bullhead City. It may have been the first crossing of the wide river by a foreigner in this part of the country.

Years went by and more and more visitors to the region came and went but one gentleman by the name of William Harrison Hardy decided to plant roots in the desert by the river. He began a steamboat enterprise bringing goods to trade up and down the river to small mining camps and larger towns along the river. Hardy ventured into other businesses as well: toll roads, delivering of mail, and other occupations that made him the second richest man in Arizona by 1864 and also the same year as Hardy’s settlement officially adopted the name Hardyville.

The richest man at this time in Arizona was Edmund William Wells who was a businessman, politician and eventually would serve on the Arizona territorial Supreme Court.

Hardy was also an inventor and is credited with creating the first riveted mail sack to be used by the United States Postal Service. A pretty good conception since he was also the first Postmaster General of the town of Hardyville.

As with all good things, Hardyville saw a sharp drop in business in the following twenty years with the coming of the railroads to Yuma, Arizona, the movement of the county seat to Cerbat (an up and coming mining district), and competition with other barge companies on the Colorado River. Soon the railroad got all the way to Needles, California knocking another huge money making opportunity for Hardy and fellow businessmen. Silver prices plummeted and many of the mining operations ceased to exist since it was no longer profitable to mine the ore.

Of course, like most old west towns, fire struck a few times turning much of the small town into cinders. Rebuilt but without the same enthusiasm as there once was left and the town getting smaller and smaller in population left the future a bit uncertain for Hardyville. There wasn't enough work to support a single man let alone a family so most people moved onto where the grass was supposedly greener.

At the turn of the twentieth century Hardyville was a ghost town sitting idle along the beautiful flowing waters of the Colorado River.

William Harrison Hardy left, moving to Yuma to oversee the construction of the territorial prison there and died of cancer in 1906 at his sister's house in Whittier at the age of either 82 or 83 (a bit of a discrepancy on his birth year). He is buried at the Broadway Cemetery in Whittier, California - seems somewhat unfair that he wasn't returned to the town he had founded but fairness isn't always a part of life or death.

Decades later, an engineering feat called the Bullhead Dam project, named after the 'Bulls Head Rock' formation along the Colorado River in the 1940's changed the area for good. Later renamed the Davis Dam creating the huge Mohave Lake to the north of what was once Hardyville.

With the huge construction project came numerous businesses to support the crews needed to build the dam which was finally completed in 1951. More businesses came into the area in the following years making the area more profitable and the name of Bullhead City came into being in 1953.

The rest is modern history.

Of course, with the development of the gambling mecca of Laughlin, Nevada along the blue waters of the Colorado River employment was no longer an issue. The population on both sides of the river continued to grow to their present sizes.

William Harrison Hardy probably would never have dreamed that one day his little venture along a river in a pretty hostile climate would eventually become so well known. No, like those other folks buried int he Hardyville Pioneer Cemetery he didn't live long enough to see his dreams cone to fruition.

So, again - go out and travel and see what you can learn by accident. The explorer may be surprised what is in their own backyard.

For further information on the cemetery: