It's almost that time again - where families and friends sit around a crispy golden bird and tell each other all the things they are thankful for.

Every year it arrives with lots of food, drink and company. Some company desired and some not so desired.

It's Thanksgiving - a holiday many people love and hate at the same time. Some tables are full of people who are thankful they are alive - for the time being.

And there are those around the table who wish they didn't have to be there. Smiling faces, inane conversations and dumb expressions - ah, what dinner parties are made of. 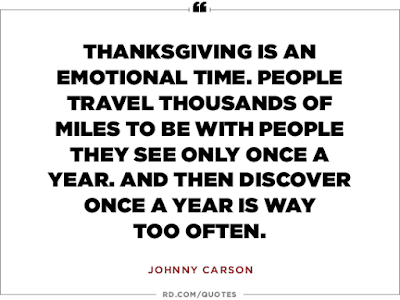 Johnny Carson may have got it right after all.

Of course there are many things to be thankful for in our daily lives - like good health, good fortune, and not having to see certain people again for another year.

Thanksgiving started as a harvest festival to celebrate the bounties of food stuffs that would maintain the settlers through the cold winter months.
President George Washington proclaimed it should be observed yearly in 1789. It wasn't every year the giving thanks day was celebrated - no, that didn't occur until 1863 when President Lincoln declared it a federal holiday. 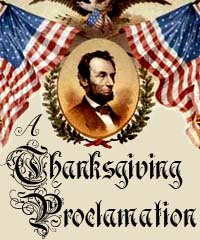 At J and L we do appreciate our family and friends but realize that is not always the case for others in our society.

Perhaps Thanksgiving should be looked at as a time when friends and family visit - put away past troubles and look to the future. A momentary respite from a hectic year when we all look into our fellow humans eyes and say we are thankful they are with us. Life is often too short so this year, as every year we should make an effort to be thankful for all we have.

Is it too difficult to say thanks to those around us, really? 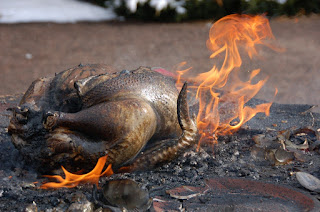 So what if the turkey is a bit over done....

﻿
...or the mashed potatoes are not smooth as butter or even if the dinner table looks like this.


May this blog of Thanksgiving bring you a smile and a laugh.  We truly and joyfully wish everyone a wonderful and happy
Holiday. 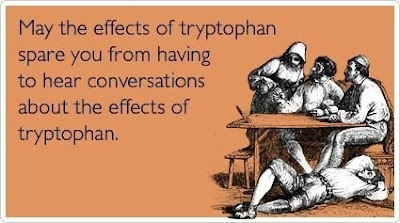 Let's do it again next year - uh, maybe not.

On the eleventh hour of the eleventh day of the eleventh month, it was finally all quiet on the Western Front. An armistice was signed between the Allies and Germany, for a cessation to the hostilities for the war to end all wars. So it was that November 11, 1918 became a national holiday among the allied nations, and dubbed Armistice Day.

Since then, after the war to end all wars became World War I, and it appeared the term "armistice" sadly held true its original definition, and had become merely a temporary truce, the name for the date has changed. Still a national holiday, it now commemorates the veterans of the wars which followed. Britain, France, Australia, Canada and the United States all set aside this date to honor and remember the sacrifices of our veterans, living or dead. Now known as Remembrance Day in Canada, and Remembrance Sunday in Britain (so the date flexes with the calendar, the 2nd Sunday of November), we know it as Veterans Day.

There are many ways citizens have, over the past century or so, chosen to honor and remember those whose sacrifice have won for the rest of us the freedoms which we enjoy.

In South Africa, a toast to fallen comrades is observed by not only two minutes of silence, but two minutes of utter and complete darkness, lit only by the Light of Remembrance.

In the Commonwealth Nations, including the United Kingdom, Canada, India, much of the Caribbean and a number of African Nations, the date commemorates veterans of both World Wars, as well as the fallen, both killed and injured servicemen, in subsequent wars. Its symbol is the poppy. But, why the poppy?

A Canadian doctor, Lieutenant Colonel John McCrae, lost a friend in the spring of 1915, and was inspired by the poppies growing in the battle-scarred fields in Ypres, West Flanders, Belgium. He writes:

In Flanders fields the poppies blow
Between the crosses, row on row,
That mark our place: and in the sky
The larks still bravely singing fly
Scarce heard amid the guns below.

We are the dead: Short days ago,
We lived, felt dawn, saw sunset glow,
Loved and were loved: and now we lie
In Flanders fields!

Take up our quarrel with the foe
To you, from failing hands, we throw
The torch: be yours to hold it high
If ye break faith with us who dies,
We shall not sleep, though poppies grow
In Flanders fields.


McCrae's poem inspired an American teacher, Moina Michael, to make and sell silk poppies to raise money for ex-service members. From there, the poppy made its way back across the pond to become the symbol of Royal British Legion. And still you ask why? The poppy is an incredibly resilient flower. It managed to grow, to bloom, to flourish in fields otherwise destroyed by war. It is the symbol of the strength of resilience of humanity to grow from adversity and flourish.

So, as you go about your very busy lives, doing those everyday things which take up so much of our time, stop and think on these things. Whether you are satisfied with the election results or not, you have the freedom to cast your vote and make your opinions known. Whatever liberties you enjoy, you do so because of the sacrifice of service of our veterans. Sometimes, they spend their entire lives defending our way of life. Sometimes, they lose theirs in the process. And sometimes, they return with visible, or invisible, scars. Remember, appreciate, and thank a Veteran. And not just on November 11, but every precious moment you breathe in freedom's air.